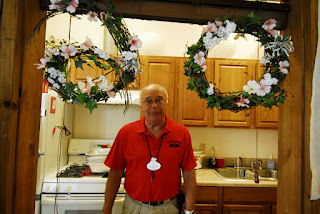 The 20th Anniversary Dogwood Rally was held 3-5 June, 2016 at Rockahock Campground in Lanexa, VA. The hosts for this rally were the Buelow’s, Cummings, Hicks, and Sohles. A total of 69 former, current and new members, along with invited guests attended the rally to include EAMA officers Bill Mallory, Garnetta Mallory, Jerry Cohen and wife Millie, along with Berkley Alexander and wife Karen. Former members attending included Bob and Carol Chuilli, Robert and Nancy Greene, Bill and Rachel Ferebee, and Amelia Wynne. Welcome new members Mike and Cindy Barbeau.

Although the rally didn’t officially begin until Friday, many attendees arrived on Thursday, and as they arrived, Dogwood goody bags which included special 20th Anniversary Dogwood pins were distributed. As Dogwooders do, we got together for an informal social hour and potluck. As usual, food was plentiful, and after several hours of fun and friendship, we called it a night.

Friday social hour included a 1 hour presentation and raffle by Danielle McMillian from Pilot Flying J. Danielle briefed our group on current and future plans of PilotFlying J to better serve the RV community and also solicited inputs and suggestions from attendees. A very informative presentation was made by Danielle, along with free travel guides and gift cards from Pilot Flying J. Prior to dinner; our 20th Anniversary Dogwood banner was unveiled to the crowd. Dinner included a delicious Italian meal of marinara sauce, meat balls, pasta, salad, bread, and dessert. No one left hungry. After dinner we were entertained by none other than our own Donald Warthan and the Heritage Bluegrass Band. Many thanks to the Warthan’s and Heritage for a fun filled performance.
Saturday morning included a full breakfast of eggs, bacon, sausage, potatoes, grits, fruit, breads, and beverages. Breakfast was followed by a business meeting at which a full slate of officers for the 2017-2018 election were nominated.

Saturday social hour included a group picture (imagine trying to get 60 people to stand still and keep quiet for a picture after socializing for over an hour.) All went well. Dinner included pork BBQ and all the trimmings along with a 20thAnniversary Dogwood cake and ice cream.

After dinner there was a program to commemorate our 20th Anniversary with Dogwood President Buck Buchanan as the MC. The program included presentation of a Dogwood Certificate, and founding member pins to Steve and Judy Czarsty, the founders of our chapter in June of 1996. Charter member pins were also presented to Steve and Judy, along with Bob and Carol Chuilli , Max and Barbara Hicks, Ed and Connie Tilman, and Amelia Wynne. Next to come was the presentation by Bill Mallory of a 20th Anniversary Certificate from FMCA. Without a doubt, the hit of the program was a 16 minute video produced by Paul Cummings. It included pictures, documents and comments covering Dogwood from its inception to present. There were lots of ooh’s, aah’s, laughs and a big hand when it was over. (Thank you Paul.)

Following the Video, the Sohles oversaw a raffle to give away the many great items that they were able to put together for the raffle and goody bags. (Thank you Steve and Sue.) Of special mention was the Dogwood afghan handcrafted by Susan Buelow, along with the Dogwood themed cross stitch and the beautiful Dogwood centerpieces hand-crafted by Nancy Cummings. (Thank you Susan and Nancy.) The raffle concluded the program and a very fun filled evening.


Sunday morning included a heavy continental breakfast and farewells as members prepared to pack up and move out of rain soaked camp sites from a down pour the previous evening.
Many thanks to all who attended this rally, to those who contributed to its success, and special thanks to the Buelow’s, Cummings, Hicks, and Sohles for hosting a very memorable event.

Click here to see 60 pictures taken at the 20th Rally.