Dogwood 20th Video on You Tube 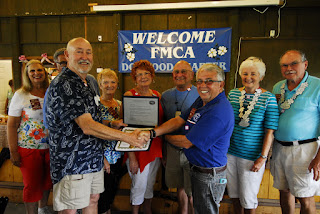 
Hope everyone has had a great summer of RVing, traveling, rallies and have many more adventures planned.

Election results are in and as the Chairman of Dogwood's Nominating Committee it is my pleasure to present your FMCA Dogwood 2017-2018 Officers:

I look forward to seeing our members at the Myrtle Beach Rally in September.

Update on the July 2016 rally posted by President, Buck Buchanan and Jim Buelow

Upon  arrival to Country Acres we found that the pavilion was not quite in the location we were led to believe and there was no parking area. Our camp sites were located in the new area, great sites with lots of room just across from the pool and for those who like walking a great trail. Thanks to Ben Phillips a 10 x 20 top was set up on his site for all of the Dogwood's' gatherings. The weather was hot and humid but most days pleasant enough to do some sightseeing. There were several days that thunderstorms threatened but never developed. Everyone had arrived by Thursday so we took a trip to the local Olive Garden for dinner.  Friday's dinner included four different sliced meats, two cheeses, pickles, watermelon, local slice tomatoes, spaghetti salad, chicken salad and pasta salad along with strawberry/berry shortcake and brownies. Thanks to everyone who provided appetizers and deserts.
Saturday morning breakfast was moved to 8:30 instead of 9 with more food than could be eaten. Thanks to Jim Buelow who arranged the free two hour trip of the countryside making several stops for purchasing and enjoying the local grown and prepared food. Dinner was at Good and Plenty as Plain and Fancy had been booked for over a month. Some of our members found time to made trips to Bird in hand, Intercourse, did some local shopping and visited a winery.
Sunday's continental breakfast closed our weekend with some of us heading home, ending another successful  rally.
Attendees included Allens, Alexanders, Buelows, Hicks, Schoolars, Soles, Veerland and hosts Buchanans and Phillips.
Missed the Greenwoods who had lost their RV in a storm.

After attending the PA rally where we had a very good time, the Buelow's and the Sohles hung around the area for a few days. On Sunday, we took a trip on one of the oldest operating steam railroads in the USA.We traveled from Strasburg, PA to Paradise,PA and back through the Amish country. And because they thought we were such special people, they gave us our own Club Car to travel in.(LOL). We all really enjoyed the trip and a great time was had by all. 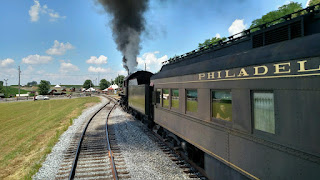 This is a final notice for the rally being held in Myrtle Beach at the Pirateland Campground.  At this time there are 3 sites that have not been taken.  They are #776, 766 and 775.  Pirateland will hold these sites until August 17th.  After that, you're on your own.
Thirteen sites have been reserved for Dogwood from Saturday the 17th of September departing Sunday the 25th. of September.  Although the official rally dates are Friday and Saturday of that week, many members are planning to come for the entire week.
We have been given a comm on area site (#735) to gather during the week.  There is no rally fee.  We plan to potluck and dine out.  We are sure that no one is going hungry, as usual.
Also, we need at least four 8 X 10 canopies to use in the common area.  We could also use a few on the beach if you have one.  Please let Dennis Reid know if you have one can bring.  (reid9439@gmail.com)